These clamps are universal and will work with any brand of crimp style PEX fittings or PEX tubing.

FEATURES - Form a complete 360-Degree watertight seal. There is no protrusion and gap in the inner, narrowband design providing a more concentrated sealing pressure.

Ear Clamps consist of a band (usually stainless steel) into which one or more “ears” or closing elements have been formed. The clamp is placed over the end of the hose or tube to be connected and when each ear is closed at the base of the ear with a special pincer tool, it permanently deforms, pulling the band, and causing the band to tighten around the hose. The size of clamp should be chosen such that the ear(s) are almost completely closed on installation.

Some such clamps feature dimples intended to provide a spring effect when the diameter of the hose or tube contracts or expands due to thermal or mechanical effects.

A stepless type of ear clamp is which eliminates steps or gaps on the inner circumference of the clamp. This is said to provide uniform compression and a 360° seal. Such stepless clamps are claimed to be well suited to applications involving thin-walled hoses, supposedly with higher retained loads. This suggests they should be considered for difficult to seal applications such as molded plastics or other less malleable materials, commonly used in the automotive industry.

Other features of this style of clamp include: narrow band widths, intended to provide a concentrated compression of the hose or tube; and tamper resistance, due to the permanent deformation of the clamp’s “ear”. If closure of the clamp “ear(s)” is performed to manufacturer's recommendations, which generally provide for constant jaw force, the sealing effect is not unduly sensitive to component tolerance variations. 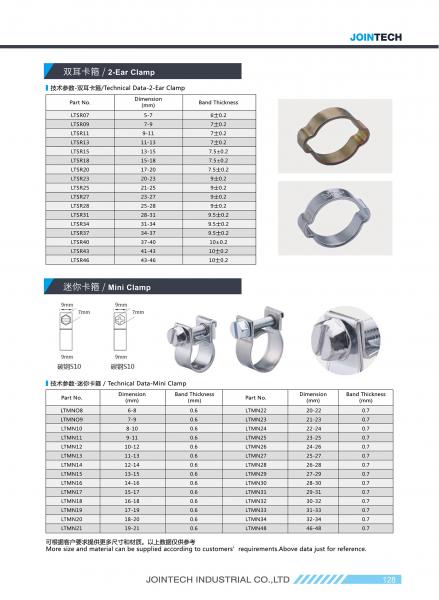 Jointech Industrial Co.,Ltd is a R&D, manufacturing and sales company. In the past over 20 years, we have been focusing on the development of toggle clamps, toggle hasps, locking pliers and hose clamps. By constant accumulation and innovation, Jointech has made itself to be a new enterprise with strong technical capability and well-organized management. With the help of precise CNC machines and skilled employees, our products have been sold out to over 50 different countries.
Jointech specializes in development and design of aircraft, automobile and all manufacturing and processing industries, strives for the manufacturing industry in China to provide reliable, durable, effective and accurate tools. Jointech offers all types of fixtures for customers, not only provides all kinds of universal fixtures, but also ables to produce customized ones as per customer's requirements. People from home and abroad are warmly welcome to our factory for business activities! We bet our services will be different!

As below are some images of our Exhibitions in different countries: